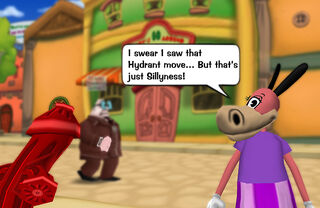 Many people were expecting another encrypted post to appear on this date, instead, a regular looking post was made informing players that Toon's stats would not be deleted after Beta. Disappointment quickly spread with the lack of a mysterious blog post. To this, Joey replied in the official IRC channel #toontownrewritten, "You aren't looking deep enough."

Quickly enough, many had discovered a clue in this paragraph of the post, "Enough of the Sillyness, though -- you know, I have said that word quite a few times in this post. Sorry about that! I'm not the best writer, but it isn't a typo: it's just a habit. See, Doctor Surlee told me a long time ago to remember that word for him in case he ever needed it. To keep it in my mind, I just got into the habit of saying it often so that I wouldn't forget. Just a little quirk of mine!" Next, they looked at the following sentence, "Anyhoo, I better be off to arrange some more Teleportation papers. Don't forget to stop by and say Howdy sometime!" In response, many people went to Mary's shop and said "Howdy!" in SpeedChat, with nothing happening. Joey then replied, "You won't be able to figure it out until the update."

Once the update was pushed, people headed to Mary's shop and when they said "Howdy!, Mary said that she and other shopkeepers were to remember certain words. The word Mary had to remember was "Sillyness." Quickly after, everyone realized that the Toons to say "Howdy!" to were the Toons that give you teleportation access. Eventually, the player was lead to Professor Flake, who gave a link to a text document (ttr://assets/LL-memo-607630003555.txt) on the Toontown Rewritten website. The document said the following:

It is almost time. I have to do this. Remember the fate but not the mistake.
This time I will help. This time we will win.

In case I have forgotten:

- The sequence is more important than it first appears.
- Words are not all that's important.
- Not everything is meant to be opened with a key.
- Little-endianness is better.
- Mistakes are important. They got you here.
- The best security is the unknown.
- Scrooge visits at 2:03 PM.
- Everything is probably important.
- Undo mistakes, not fate.
- Don't be the chicken.
- Time is ticking.

The keys that were found from the shopkeepers were: "Sillyness," "Springy Partlicles," "Lafter," and "Creating Equiment."

Retrieved from "https://toontownrewritten.fandom.com/wiki/ARG:_Remember?oldid=93594"
Community content is available under CC-BY-SA unless otherwise noted.