After LoonyLabs.net had suddenly disappeared sometime in 2016, Doctor Surlee announced on January 25, 2018 (2007) with a blog post titled "LoonyLabs.net is Back Online" in an attempt to lure "The Two" towards the website and trigger yet another anomaly. A day later, on the 26th, LL-TERMINAL26 created a blog post initiating an incoming transmission. What Doctor Surlee had decided to get himself into would become the most complex ARG that the Toontown community has ever solved.

At the time of the previous ARG, no one knew whom LL-TERMINAL26 belonged to, and remained a mystery for quite some time until now. It was discovered that Doctor Fissionton (formerly known as “The Two” or “???”) is a Loony Labs employee who supposedly resigned many years ago and owns LL-TERMINAL26. Only LL-TERMINAL43 and Ll-TERMINAL26 can be accessed while the rest of the terminals from the previous ARG are offline.

Logging into a terminal results in allowance of using the following commands: "whoami", "cd", "ls", "cat", "clear", and "exit".

The above text files are the following ARGs:

The above text files (with the exception of Lab Report) are the following ARGs:

The above files are the following blueprints: 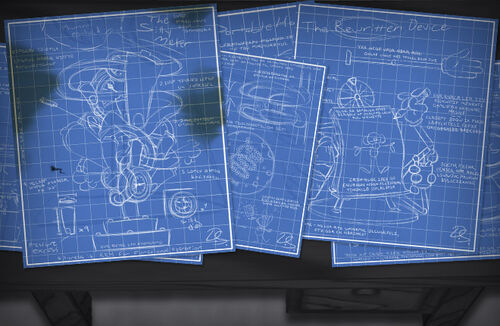 January 26, 2018 is when a variety of cryptic messages started to appear, resulting in an entirely brand new ARG that is considered to be the most complex one yet. Every previous ARG starting with the first one on November 26, 2013 (2002) has lead up to this, which is how all of Doctor Surlee's blueprints above were eventually discovered as time went on. 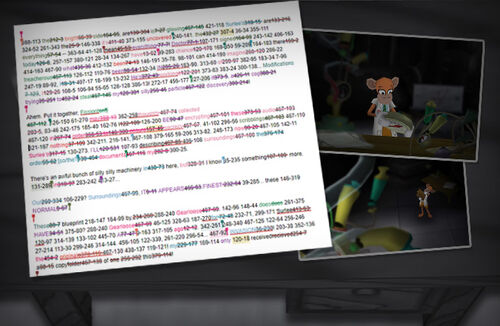 The final Research Report offered another password (2for1and1for2) that would allow access to LL-TERMINAL26’s “26” directory. After inputting "cd 26" along with the password, the following message will appear:

Right after the message is immediately followed by three documents; only "The Desk of Gyro Gearloose" did not require a password to gain access. The passwords to access the documents are as followed:

From examining the three documents, Doctor Fissionton was a Loony Labs scientist skeptical of Doctor Surlee. He uncovered plans for all of the blueprints, but the biggest find was "The Rewritten Experiment", which described an experiment by Doctor Surlee to take Toontown back in time in order to defeat the Cogs. The plan was to rewrite Toontown using a pocketwatch.

The pocketwatch from where Doctor Fissionton found it malfunctioned and ripped him away from time due to being unstable. However, the pocketwatch unveiled the true nature of the 26th: An anomaly caused by Doctor Surlee's time travel. Because the past cannot be replicated perfectly, Doctor Fissionton found a "rewritten" version of himself as a cat.

When "The Rewritten Experiment" was temporarily unavailable due to a bug within LoonyLabs.net, a filler document was posted on the Toontown Rewritten Discord server to keep the players occupied.[1] The cryptic text when decoded reads: 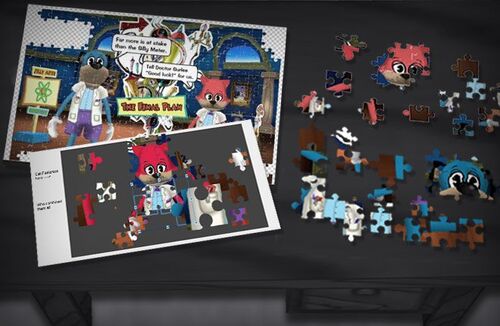 After all that hard work solving the Research Reports and the three documents, one last puzzle titled "The Final Plan" still remained. The last puzzle, along with a message from Doctor Fissionton, can be accessed with watch as the password. In the message below, Doctor Fissionton left a ZIP file for the puzzle itself at the end of the conversation.

Doctor Fissionton states that the reason Doctor Surlee had done of all this is to save Toontown. Surlee Gyro Gearloose, his full name as revealed by Doctor Fissionton, rewrote himself to become a monkey to prevent from being identified by any Toon as the one who accidentally created the Cogs.

The puzzle comprises of putting over 300 pieces together to create a picture. The picture shows two versions of Doctor Fissionton inside the Toon Hall with a Silly Meter cardboard from behind, with one telling the Toons to wish Doctor Surlee "Good luck!", and the other confirming that far more is at stake than the Silly Meter. Although this was the end of the ARG, this was not the end of the 26th altogether. 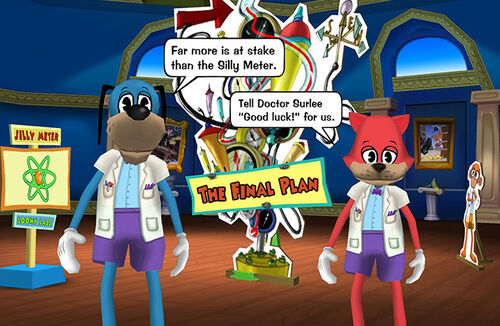 Posted by RigbyTTTelegraph on Sat Mar 26 22:24:29 2016 UTC
https://www.reddit.com/r/Toontown/comments/4c34an/new_arg_info_will_be_updated_when_new_info_is/d1em7uw
API: api.loonylabs.net
The terminal is based off jQuery and a terminal script by Chris Done and Simon David Pratt. The TTR team modified the default CSS stylesheet to make it look toony.
This domain was actually registered back in March 2015, so if this is something big they've been working on it for a while. Then again, it's unlikely and this domain is probably just used for building hype.
Entering 26 will result in the terminal being temporarily unavailable.

Retrieved from "https://toontownrewritten.fandom.com/wiki/ARG:_Incoming_Transmission_from_LL-TERMINAL26?oldid=86741"
Community content is available under CC-BY-SA unless otherwise noted.