Confidential refers to the 33rd blog post from the Toontown Rewritten website titled "null [CONFIDENTIAL] - Yes, that means you too." that was posted by LL-TERMINAL43 on November 26, 2013.[1] In past terms, this event occurred on November 26, 2002.

Doctor Dimm visits Doctor Surlee's office to look for a sprocket that he has been working on. Dimm accidentally activates a mechanical arm and the scanner. Surlee's blueprint of the Silly Meter is scanned, compressed, and sent before Dimm can shut off the computer.

Below is an encrypted version of the Silly Meter blueprint, which was linked as "ttr://assets//caesar-would-be-pleased.jpg" on the blog post after decoding.[1][2] 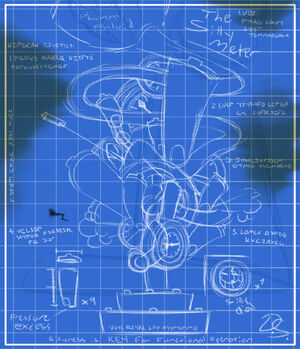 Below is a decrypted version of the Silly Meter blueprint. 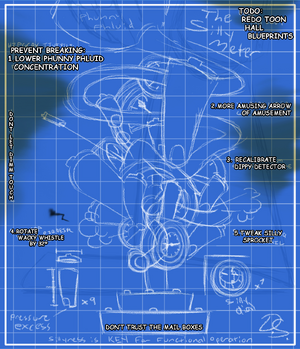 The Silly Meter blueprint was decoded using a version of the Caesar cipher. Specifically, it used the keyboard as its reference when making the letter substitution.

The following steps demonstrate how the cipher is decoded.[3]

Retrieved from "https://toontownrewritten.fandom.com/wiki/ARG:_Confidential?oldid=84253"
Community content is available under CC-BY-SA unless otherwise noted.